If you require the sum of a range with the certain condition then use the SUMIF function. If you separate SUM + IF, it already makes you understand why we use that.

An example of SUMIF and explaining its syntax

First, let me show you an example of using SUMIF with a single column that contains numbers. On that basis, we can understand its syntax easily.

In the example, the A2 to A10 cells are assigned numbers. We will get the sum of all cells which numbers are greater than or equal 100. The SUMIF formula: 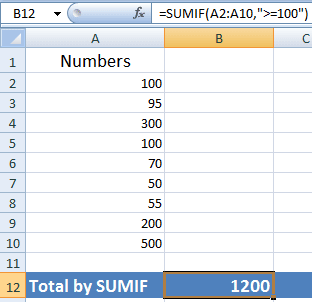 You can see, the SUMIF function omitted the numbers less than 100 and returned the sum.

The general syntax of using the SUMIF function is:

We used only two required parameters in above example, where:

The example of using sum_range in Excel SUMIF function

For this example, I will also use the sum_range argument. The SUMIF will actually get the total from this range, however, the range is filtered based on the given criteria. The formula of SUMIF: 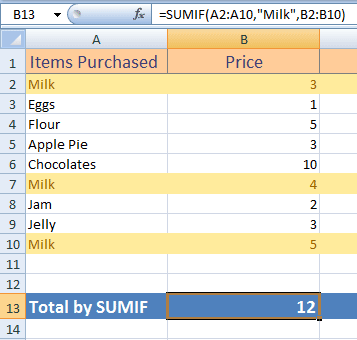 In the output, you can see three occurrences of “Milk” in A2:A10 cells. The SUMIF took the numbers from B2:B10 range and returned those three cell’s total. See the output if we used A2:A8 range: 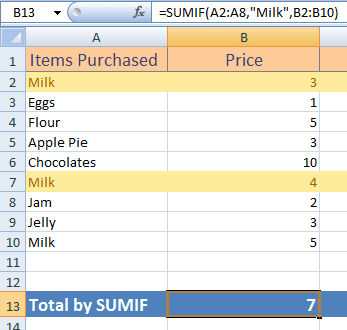 Now it only returned the sum of first two occurrences of the “Milk”.

For using multiple criteria to get sum, you may use the SUMIFS function.

Using the cell reference in criteria

The following example shows using the cell reference in the in the SUMIF criteria:

The formula of SUMIF: 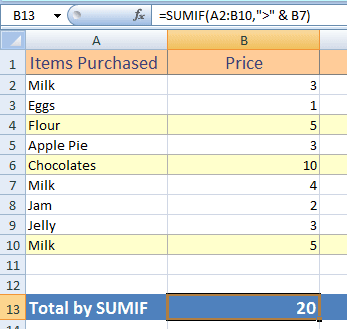 The SUMIF found 4 value in B7 and so returned the total of three cells which value is greater than 4.

Specifying a number for getting the SUM example

Rather than a condition, you may also use a simple number in the SUMIF function criteria to find the matches in the given range and return the total.

See an example below: 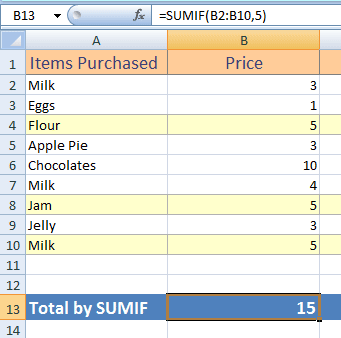 The SUMIF function also allows using the wildcard characters if a criterion is text (as used in one of above example with “Milk”). In the following example, I used “J*” for criteria and see the result: 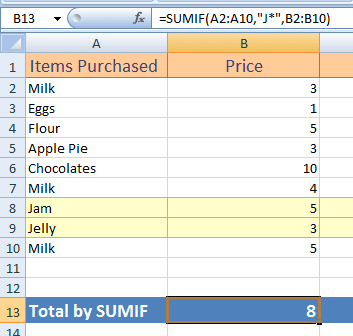 You can see, it summed up the Jam and Jelly prices and returned 8.

Similarly, you may use the ‘?’ question mark wildcard in the SUMIF function. The ‘?’ matches the single character while ‘*’ matches any sequence of characters.