The MOD function returns the remainder after a number is divided by the divisor. For example:

It will result in 0.

The general syntax is:

The result by using INT function will be the same for this:

The section below shows a few examples of MOD function with Excel screenshots.

The MOD function is available in the following versions/platforms:

An example of MOD Excel function

In this example, the cells from A2 to A6 contain the numbers while B2 to B6 divisors. The MOD formula is applied on cell C2 to C6 for respective A and B cells.

To explain how MOD function produces the result, different values with mixed signs in A and B cells are given. See the results below: 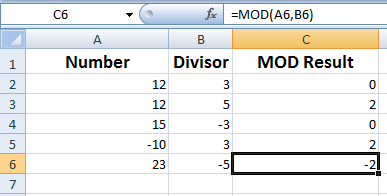 You can see, the result of cells

Getting the sum of even numbers example

Generally, the MOD function is not used independently but with other complex formulas. In the example below, we have numbers in A cells. The target is to get the sum of only even numbers in those cells.

For that, we can use the MOD function and check the number is each target cell. If the result of the division of that number by 2 is zero that means it is an even number.

Then, we used the SUMPRODUCT function to get the total of all even numbers as follows:

The general way of expressing the INT as MOD function is:

For showing how INT works, I used the same Excel sheet as in the first example and added another column i.e. INT Result (D2 to D6 cells).

This is adjacent to the MOD Result and uses the following formula for corresponding A and B cell (in the case of A4 and B4):

See the numbers, divisors and result for both:

You can see, both MOD and INT functions produced the same results.

Also, see the sheet below where I added two large values and you can see the MOD function produced the #NUM! error while INT function resulted in the remainder: